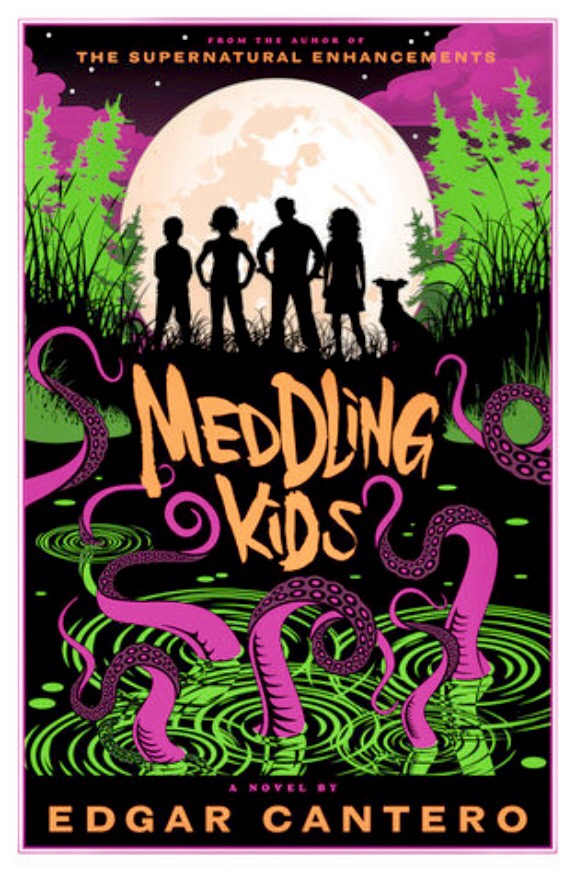 Goodreads Description:
1990. The teen detectives once known as the Blyton Summer Detective Club (of Blyton Hills, a small mining town in the Zoinx River Valley in Oregon) are all grown up and haven’t seen each other since their fateful, final case in 1977. Andy, the tomboy, is twenty-five and on the run, wanted in at least two states. Kerri, one-time kid genius and budding biologist, is bartending in New York, working on a serious drinking problem. At least she’s got Tim, an excitable Weimaraner descended from the original canine member of the team. Nate, the horror nerd, has spent the last thirteen years in and out of mental health institutions, and currently resides in an asylum in Arhkam, Massachusetts. The only friend he still sees is Peter, the handsome jock turned movie star. The problem is, Peter’s been dead for years.

The time has come to uncover the source of their nightmares and return to where it all began in 1977. This time, it better not be a man in a mask. The real monsters are waiting.

With raucous humor and brilliantly orchestrated mayhem, Edgar Cantero’s Meddling Kids taps into our shared nostalgia for the books and cartoons we grew up with, and delivers an exuberant, eclectic, and highly entertaining celebration of horror, life, friendship, and many-tentacled, interdimensional demon spawn.

Review
As a lifelong fan of Scooby Doo (who had VERY STRONG OPINIONS of such things as the creators changing the theme song when I was 4), I thought this sounded like a fun romp of a book. It might have been, but it contains some really troubling language that was both unnecessary and extrememly disappointing.

For example: Pretty early on, as we’re getting introduced to all the main players in the story, we’re taken to an asylum. The opening scene there is one of the main trouble spots. The author is setting the scene, talking about other patients there before we even meet Nate. On one page he describes a character named Kimrean – so the character has a name. But in two different instances, the character is referred to as “the hermaphrodite.” At first, the term took me aback, because we have much better language to talk about trans/intersex life these days. I wondered if I was being “overly sensitive” because it IS supposed to be 1990. But then when I went back to reread it, it’s not just the term hermaphrodite that is troubling. It’s the fact that he refers to a named character as both “the schizophrenic hermaphrodite” and again as “the hermaphrodite.” Why?! It’s such incredibly othering language, and it’s just lazy. That is what makes it offensive. Despite it being set in 1990, it was written long after that -and I am CERTAIN that the author could have handled this scene with more care. Instead, he went for the cheap laugh (of the “look at all the freaky people!” variety), and it really failed.

So, if I could excise that scene from the book and my memory, how would I feel about the book? It was okay. I didn’t love it, but it was definitely a unique story. There is a sense of snarky, overly clever humor (the kind where you can imagine the author being so entertained by his own wit) threaded through that might work really well for you, or it might make you cringe – it was about 30/70 worked/didn’t work for me. Words like “tragichuckled” don’t exist FOR A REASON.

The pacing was odd. And there are no chapters, just Parts (I think 1-5). I kind of missed the endpoint of chapters for pacing’s sake. It was the kind of book where if I was reading it, I found it compelling enough, but I was NOT rushing to get back to it between readings. I should say that I have never read Lovecraft, so I can’t speak to that aspect of the book.

If it was cleaned up a LOT, and sensitivity readers/writers were brought in, it could make a fun summer movie – that’s what I kept thinking as I read it.

But as it stands, it needs a rewrite. I could not in good conscience recommend this book to anyone as it is now.

Thanks to NetGalley and Doubleday for a copy of this book in exchange for an honest review.